Apple today released iOS 7.0.6 for iPhone, iPad, and iPod touch, a minor update that includes a fix for SSL connection verification. iOS 7.0.6, which carries a build number of 11b651, is available as an over-the-air-update and weighs in at 35.4MB on an iPhone 5s. 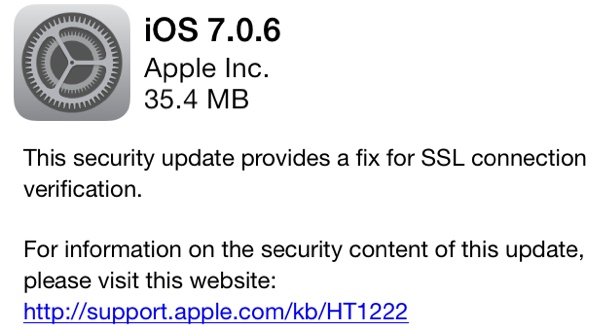 According to an Apple Support Knowledge Base article, the SSL vulnerability allowed a hacker to capture or modify data in supposedly secure sessions.

Impact: An attacker with a privileged network position may capture or modify data in sessions protected by SSL/TLS

Description: Secure Transport failed to validate the authenticity of the connection. This issue was addressed by restoring missing validation steps.

Apple has also released iOS 6.1.6 (build 10b500) for the iPhone 3GS and fourth-generation iPod touch.