The hardware from Qualcomm is capable of maximum theoretical download speeds of 600Mb/s, while the Intel LTE modem tops out at 450Mb/s, but the Qualcomm-equipped Verizon iPhone 7 is only marginally outperforming the AT&T iPhone 7. Researchers believe Apple may be hobbling the Verizon iPhone 7 by not taking advantage of “a crucial component,” thereby ensuring all models of the iPhone 7 perform at a similar level. 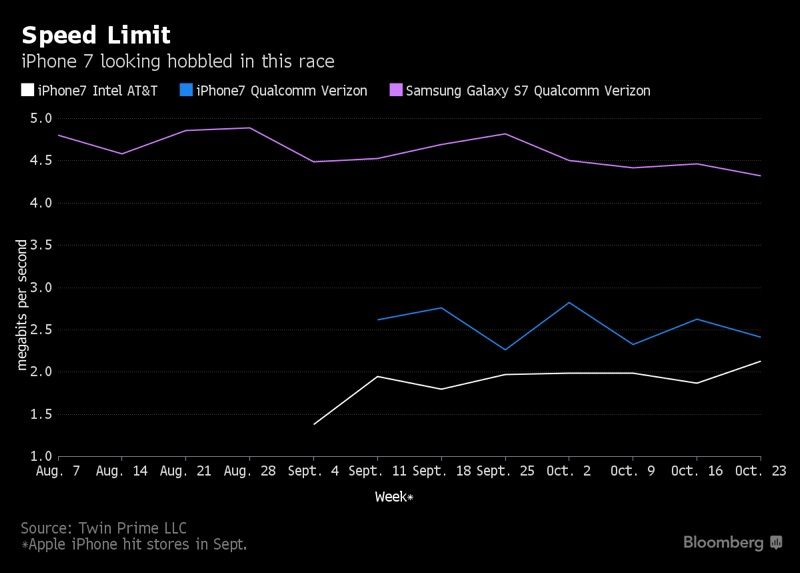 “The data indicates that the iPhone 7 is not taking advantage of all of Verizon’s network capabilities,” said Gabriel Tavridis, head of product at Twin Prime. “I doubt that Apple is throttling each bit on the Verizon iPhone, but it could have chosen to not enable certain features of the network chip.” […]

Field tests suggest the Verizon iPhone 7 is just a “little faster” than the AT&T iPhone 7, but not as fast as it could be. Tests were conducted by comparing iPhone 7 performance on the Verizon network to a Samsung Galaxy S7, which also uses the Qualcomm X12. Data collected from more than 100,000 phones downloading the same image indicates the S7 was twice as fast as the iPhone 7.

In a statement, an Apple spokesperson said there is no discernible difference in the wireless performance of any of the iPhone 7 models.

“Every iPhone 7 and iPhone 7 Plus meets or exceeds all of Apple’s wireless performance standards, quality metrics, and reliability testing,” Apple spokeswoman Trudy Muller said. “In all of our rigorous lab tests based on wireless industry standards, in thousands of hours of real-world field testing, and in extensive carrier partner testing, the data shows there is no discernible difference in the wireless performance of any of the models.”

Though the two phones are performing on a similar level, past testing by Cellular Insights suggests that changes somewhat when signal strength is an issue. In areas of weak reception, the Verizon iPhone noticeably outperforms the AT&T iPhone by maintaining a stronger connection and enabling faster low-signal transfer speeds.

Other network testing companies that Bloomberg contacted said that reliably measuring data transfer speeds is difficult due to the many factors that can affect performance, but the information collected from Cellular Insights and Twin Prime was not disputed.